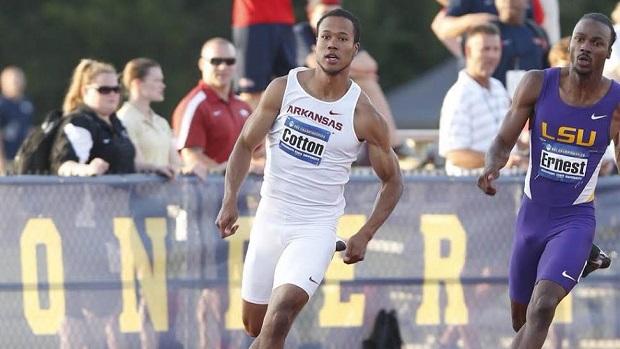 Kenzo Cotton of the University of Arkansas

For years, Kenzo Cotton caused havoc on Nebraska tracks across the state. Cotton was one of the most decorated sprinters in Nebraska track history. Cotton took the yearly Nebraska State Track Meet by storm and gave track fans memories for a lifetime. Cotton was a once in a generation athlete that was heavily recruited across the country. We spoke with Cotton and asked some questions and if he had advice for high school track athletes that might be looking to compete in college. Here is what he had to say.

1.) What was the biggest change from high school to an elite D-I program?
The biggest change for me was the difference in workout in both intensity and volume compared to high school. I've never had a workout in high school that was nearly as difficult as my "shake out" now in college.
2.) How much did competing in USATF/AAU club summer track help with your development?
I think running summer track helped me just preparing to being able to handle a long track season. It also helped with giving me three extra months to work on technical stuff and continue to try and run fast.
3.) What was the biggest factor in picking a school to compete at the next level?
My biggest factors for picking Arkansas was the championship atmosphere here and Coach Case. I wanted to be around the best and picking a good coach in college can make or break your career and I believe that I have a great one in Coach Case.
4.) What is your best advice for competitors looking to move up to the college ranks?
My biggest advice to anyone wanting to run track in college would be to contact coaches as much as possible. I wouldn't be at Arkansas if I didn't reach out to Coach Case through email.
5.) Proudest track highlight of your career?
My proudest track moment would be when we won the 4x1 at nationals. I never thought that I would know the feeling so early in my career and it was just a phenomenal feeling.